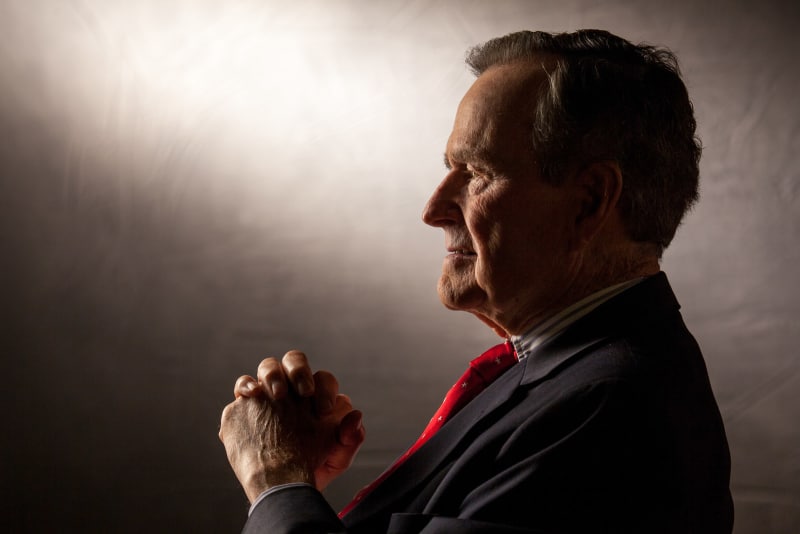 “Some see leadership as high drama and the sound of trumpets calling, and sometimes it is that. But I see history as a book with many pages, and each day we fill a page with acts of hopefulness and meaning. The new breeze blows, a page turns, the story unfolds.”

George Herbert Walker Bush passed away this past Friday. President Bush had an exemplary career of public service that is being recounted in far greater detail and with far more eloquence elsewhere. Someone once said that our resume won’t be carved on our tombstone; but what will be carved will be attributes of far more importance: beloved father, mother, brother, sister, friend, son, daughter and many other titles that are truly of greater significance than any on our business cards.

GM CEO Mary Barra caught the attention of the business world this past week when she announced that the company would cut 14,000 jobs, idle seven plants, and eviscerate its sedan line in favor of SUVs and cross-overs. Ms. Barra has made several big bets here; not only in terms of the workers and communities affected, but in terms of making a truly strategic “no turning back”  move in betting on electric and autonomous vehicles.

Ms. Barra is departing from GM’s historic leadership story in which big changes were delayed until they were practically forced on the company by the economy. Some say GM waited too long to move away from sedans; but unlike other tough periods in GM’s history, she has clearly made the call to move away from tired, dying segments to the still evolving electric and autonomous ones while the wind is at her back.

Those who don’t make decisions for themselves risk having the world do it for them. Keep your eye on GM; this is a once in a century move. This article lays it out for you.

The high-end (i.e. so called “white collar”) jobs in our economy have been less affected by the rise of the internet than producers and distributors of goods and those holding lower level service jobs. If you’ve been spared so far, the party may be over soon.

Venture capitalist Andrew Chen offers  a superb retrospective on the past, present and future of the internet’s impact on the service economy – from Craigslist to Uber, and predicts “the next era of service market places will tackle the opportunities that have eluded previous eras of service market places…and will bring the most difficult service categories online.”

This is an excellent article that puts the impact of the internet on business in historical perspective and offers a superb analysis of factors that could alter over 125 million jobs in the not too distant future. Required reading in my opinion for everyone who wants to stay competitive. Find out how the new internet marketplaces will reinvent the service economy.

The Book That Rebooted Microsoft

Microsoft CEO Satya Nadella has done a remarkable job in resurrecting the fortunes of the company since being named head of the iconic firm nearly five years ago. Many commentators point to the success of the Microsoft SurfacePro and the company’s focus on cloud computing, among other decisions, as the key reasons for this. But for a company to grow, its people have to grow, too; so how did he do it?

Simple, he says. It was all about “Mindset.”  This short article and four minute video featuring Microsoft’s head deal maker Peggy Johnson recount how she saw Nadella transform the company guided by Stanford Psychologist Carol Dweck’s book “Mindset: The New Psychology of Success.”

If you’re looking for a great speaker on this topic check out Vistage Speaker Eve Meceda (Grodnitzky) who presents Dr. Dweck’s concepts in a truly compelling and actionable way.

The folks at ITR Economics have been forecasting a pullback that will be a mere slowdown for some and an actual contraction for others. ITR is following up this forecast with some Actionable Advice for the 2019 Economic Slowdown.

On the other hand, economist Brian Wesbury looks at retail sales and employment and sees no cause for concern.  He explains why the economy will stay strong as long as the consumer stays strong.